Lovin' Me Some Evernotes

Any friend of mine knows I'm not the most organized person around.  But periodically I do binge-organize: I throw out everything I haven't used in a year, or clean out my email inbox, or spend a few hours defragging my drives and sorting files on my home pc.  Lately, motivated by baby-room-remodeling, I've been eBaying and craigslisting junk I know I don't need but can't stomach throwing away (and I've made $200 doing it)!  Still if I'm perfectly honest with myself, I'd say I like the idea of organization better than I like being organized.

Which is why I'm a little surprised that I'm still using Evernote for Getting Things Done a month later.  If you're not familiar with Evernote, the idea is that it serves as a 'second brain' (no comment on the quality of my first one).  You can put all sorts of information in it: pictures, hand-written notes, typed notes, pdf documents, voice notes, all marked with tags and organized in "notebooks" that you can instantly search. You can use any device to take or search notes: Windows or Mac PC/Laptop, web browser, iPhone, and Windows Phone, and they all sync up effortlessly in the background.  For me, this means that as long as I have my phone or laptop, I can shove stuff into my 'second brain', and get it back out instantly.  Some ways I've used it recently: 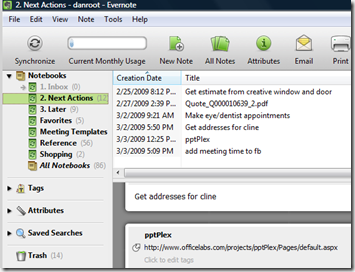 And really, that's just the tip of the iceburg. GTD recommends developing a 'trusted system' - be it a hipster PDA, Palm Pilot or Franklin organizer to get things out of your brain and into sortable lists.  Evernote has quickly become that 'trusted system' for me.

Now, I say "GTD", but I'd imagine Dave Allen would still laugh at my (lack of) organization.  Here's how I'm using it now:

I have 4 important notebooks in Evernote.  The others you see will probably get lumped to 'Reference' soon- the general idea being that since there is fast tagging and searching, keeping notebooks for everything is just overhead: 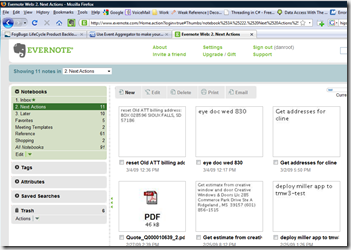 The numbering keeps them sorted nicely.  As stuff comes in via email, in-person requests, meetings, wifely honey-dos etc., they go to the inbox.  I can manually enter them on my phone, desktop, or laptop, from another computer via the web interface, or forward email to my Evernote email inbox.  Periodically, I review the inbox:

As needed, I review the Next Actions notebook:

Periodically, I review the Later notebook:

There are still some areas I'm fuzzy on - at work, we use FogBugz for managing projects and time.  It works pretty well, and I'm not sure I'd want everything from it in my Evernote.  Still, having two systems seems less than ideal.  Some sort of sync between them would be cool.  Also, I'd like a way to share a list with my wife- shopping lists, honey-do lists, etc.  Currently notebooks are public to everybody or private, so lists among friends, family, and coworkers can only be secured via obscurity.

I've been using this a little over a month, which is about a month longer than I've kept up similar drives in Outlook and other GTD apps.  We'll see if it sticks, but so far I'm enjoying my second brain.