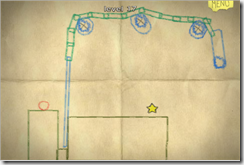 I recently bought a refurb iPhone and have been enjoying thumbing through the app store and trying apps. Being a cheapskate, I rarely purchase any - opting for the free stuff out there instead.  But I did splurge $5.99 recently to download the gem Crayon Physics, and have enjoyed it's casual nerdy style.  The premise is simple: get the star with the ball by drawing on the screen.  The first few levels introduce you to gameplay: You can draw closed or open shapes, little hinges and even ropes, which the game animates with realistic physics.   You can build up cranes, levers, catapults, or other contraptions, and no level has one "right" solution. Each level gets progressively harder, though none so far are so difficult I'd want to throw my iPhone at the wall.   A level editor lets you create and play your own levels.

The game is a port of a full windows game that won accolades at the Independent Game Festival last year.  I haven't shelled out the $20 for that version, but the demo was enjoyable- I'm holding out for the next batch of multitouch tablet PCs, which would be perfect for this sort of game.