eCommerce in the Cloud: Running NopCommerce on Azure

NopCommerce is a well-written open source eCommerce application based on .NET and SQL Server. It’s clean, full-featured, but not bulky and unwieldy like some of it’s competitors. Azure, if you aren’t familiar with it, is Microsoft’s upcoming ‘Cloud Computing’ platform, which allows customers to run .NET applications in Microsoft’s massive data centers with advanced load balancing and high availability.  One key feature of Azure, and cloud computing in general, is that the hosting can be scaled to meet demand.  If demand is high, then with literally one button click, you can make the application run on 2,3, or 20 instances (which can be thought of as servers, though they are technically virtual server instances).  You pay only for the instances and bandwidth you use at any given time.

In eCommerce, this has a very practical implications: you can ramp up the site at peak shopping times, such as holidays, and scale back when not as many people are hitting the site.  In addition, the organization need not invest in servers and IT to maintain them and can focus on their business instead of complex tasks like database backups, load balancing, and clustering infrastructure.  With Azure’s pricing model, this functionality is within the reach of mom-and-pop stores as well as larger companies.

That explains a little why NopCommerce in the cloud is cool.  But how hard is it to do?  Well, I was able to get NopCommerce running on Azure in just a few hours with relatively little fuss.  In a real project, there would of course be all of the normal issues, such as setting up products, design, and such, but Azure was really not much more difficult than your typical hosting provider.  Here’s how I went about it.

Azure offers several different flavors of data access.  The easiest to work with is probably SQL Azure, which is essentially a slightly modified version of SQL 2008.  To set this up, you simply click ‘Create Database’ on the SQL Azure management page, and enter in a database name.  SQL Azure gives you connection strings to use in your app, with the default ADO.NET or even ODBC and OLEDB providers.  I had to adjust these connection strings (removing the ‘tcp:’ prefix). 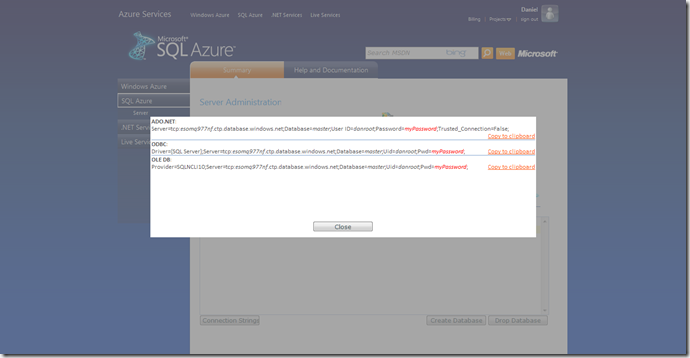 Once set up, it’s possible to connect SQL Server Management Studio (after jumping through a few minor hoops), or as I did, run the SQL Azure Migration Wizard to copy a database from my PC to SQL Azure.  This tool is nice, but in the version I used had a few bugs that I think are now fixed.  A few SQL Server features aren’t supported in SQL Azure, so you have to tweak most DB scripts to run.  The wizard does this for you, but misses some. Fortunately, the errors are easy to fix:

One the wizard completes, the database is deployed to the cloud, but contains no data.  I used SQL Management Studio to script the data as INSERT statements (Generate Scripts…turn off all scripts except ‘Script Data’) and run them against the SQL Azure instance.

To test, I changed the connection string in nopCommerce’s configuration, and it worked! 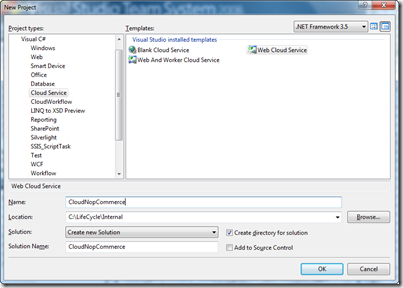 You don’t simply FTP files to Azure.  Instead, they are packaged in a custom format that contains some service configuration information.  (Also, applications are not just Web apps – Worker apps, similar to windows services, can be packaged and deployed as well).  With Azure Tools for VS installed, I added a ‘Web Cloud Service’ named ‘AzureNopCommerceStore’ to the existing NopCommerce solution.

I copied the references and files from the ‘NopCommerceStore’ ran.  Somewhat to my surprise, everything built and ran, which underscores that this is the same ASP.NET you’re already used to –not a different, scary language or something like ASP.NET MVC (which, by the way is also supported in Azure).  A few bugs did arise, though.  Azure apps run in a limited trust environment in which some functionality is not permitted.  If you’ve developed in Medium Trust, you know the sorts of restrictions, but these are a even more restricted.  A list of restrictions is available here, but in NopCommerce, the mostly revolved around code that generates bitmaps and tries to save them to disk, causing a FileIOPermissions error.

This makes sense – if deployed to multiple instances, writing a file to one instance will not be ‘synced’ up to the other instances.  Instead, you are supposed to store files like this in Azure Blob Storage.  However, in interest of time, I opted to instead generate pictures on the fly, and not cache them to disk at all.  I wrote a quick page to do this, and modified ‘PictureManager’ to accommodate.

With that out of the way, the app ran with no errors (that I’ve found yet, anyway).

Publishing to the Cloud

At this point, NopCommerce is running with one foot in the cloud.  It’s running against a SQL Azure Database in Microsoft’s datacenters, but the app itself is running on a little simulated cloud on my laptop.  To get the app running in production, you right click the ‘AzureNopCommerceStore’ and click ‘publish’.  Visual Studio builds, then creates two files – a package containing all of the web pages, etc., and a configuration file.  The Azure website is opened to a page that allows uploading these files.  Once uploaded, the deployment can be run and the app is ‘live’ on Azure.

One particularly nice feature here is that the publishing infrastructure allows for a ‘Staging’ and ‘Production’ environment.  The package can be uploaded to Staging, tested, then with a single click, transferred over to Production.  Brilliant. 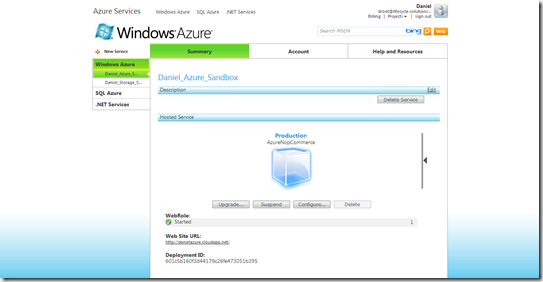 I only get one Azure hosting service to play with in the CTP so it may go away if I decide to try something else out, but for now, you can see it running here:

One more cool thing I want to show here.  The promise of Azure is that the hosting service can be adjusted as needed to meet demand.  You can imagine in current scenarios if you needed to set up load balancing for an app, you would order another server, install software, deploy your app, etc. all in a few weeks at best.  If you have a virtual environment, you would provision another server in a few minutes and deploy your app, which is nice, and essentially what Azure does behind the scenes.  But check out the UI for it: 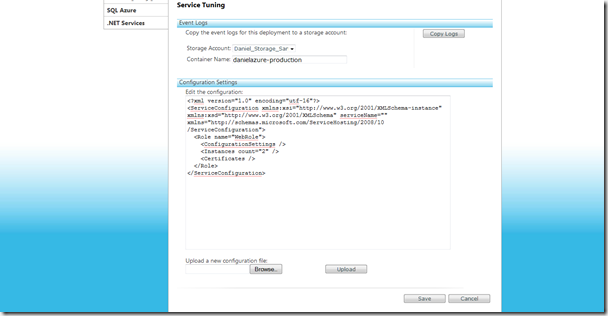 By changing ‘Instance count=”1”’ to “20” and clicking ‘Save’, I get 20 virtual instances serving up my site.  I did ‘2’ and it took about 5 minutes to provision.  As I understand it, future releases will support growing and shrinking instances automatically, but for now this is pretty close.

A few things still remain to be done.  I haven’t fully tested, especially around payment gateways and the like, so there still may be bugs to resolve.  Also, I’m not certain how SSL and custom domains work, though I imagine they are supported.  Finally, to really take advantage of Azure, it may make sense to move away from SQL Azure, which is limited to 10GB of data, to one of the other storage options.  This would require more code, but should be feasible.  For all of the hype, in my mind Azure and other cloud offerings really are just next generation hosting providers,with some services such as “infinite” storage and security federation added.  Instead of waiting hours or days for dedicated servers or shared hosting, highly available hosting is provisioned in minutes.  From a developer perspective, working with Azure required some know-how and coding, but in general it is not much more difficult than working with other hosting providers.  If you’re a developer and haven’t tried it yet, give it a shot today.

Very nice work. Now, If only I had the demand to justify it.. ;)

Great article, really good for people looking to grok Azure. Azure Datatables are one scalable alternative to SQL Azure, they offer cheap scalable storage but require you to think differently from the traditional relational model.

@charlie - Thanks! Yeah, I'll be looking at porting this to use Azure tables and blobs soon. Blob storage for pictures is pretty much a requirement, since the current project will (I believe) crash when it comes time to upload a picture. Table storage would be nice since, in theory, you could get cheaper and more scalable storage. There are some hurdles though - searching and paging work differently for one. Definitely stay tuned =)