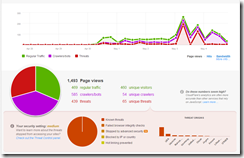 For kicks recently I turned on Cloudflare for my blog.  This service sits between users and your servers and adds several value-add services.  The free sku includes some security, analytics, caching, and CDN.  Paid skus add SSL support and more advanced security checks – including DDoS prevention.  None of the skus charge for bandwidth. Now obviously my blog isn’t the hottest site on the web (though, I am sometimes surprised by the traffic), but so far it’s meant a ~%40 reduction in bandwidth to the blog.  In this case, all that does is save Google Blogger money, but you can imagine for a cloud-hosted site that would translate pretty evenly into a 40% reduction in the bandwidth bill.  They advertise “up to 65% reduction” in bandwidth.  By using a CDN, which it automatically sets up for static content, the site is also served up faster worldwide.

Setup is fairly straight-forward, and just involves pointing your DNS to them as part of a wizard setup.  They analyze your existing DNS, then once they’ve set up their internal DNS, they tell you the name servers to point to.  This takes minutes.  The bottom line is that if you have any cloud-hosted content, then for 5 minutes and 0$, you stand to save 40-65% of your bandwidth bill.   If SSL or some of the other features drive you to the paid SKUs, then it’s still fairly simple math: if 40% of your bandwidth bill > $20, then use Cloudflare Pro, Business or Enterprise.